The Fine Art of Surfacing

This art of Surfacing is all but dead…. 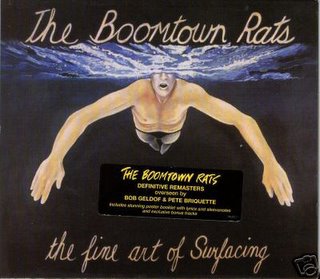 I Don't Like Mondays is the best known Boomtown Rats song. With Fingers' piano taking centre stage, it sounded nothing like the Rats had ever done before. This was produced by Phil Wainman of Sweet fame unlike all the other tracks produced by Mutt Lange. A heightened sense of drama pervades the song, rising to the "Tell me why?" chorus and the come down when the playing stops in the playground as the lesson today is how to die. No other band of the punk/new wave era could have made a song like this. Brilliant.

The second single off the album was Diamond Smiles. The song is about a débutante killing herself and only being remembered for her smile. Like I Don't Like Mondays another story about death (suicide this time), it’s more repetitive, and takes a while to get to its short chorus. Lots of quirky keyboards and the never ending la la las evoke memories of Hot Love and Hey Jude. It wasn’t the song to consolidate the Rats domination of the singles chart, but a good track nonetheless.

In contrast, Someone's Looking at You was a great single, and a pretty personal statement for Geldof on fame. The song starts with a gentle rhythmic acoustic guitar, built on by organ keyboard sounds, then breaking into a crash of electric guitars. The keyboard and guitar solos rock, and there is a great climatic build to the last uh-oh-oh-ohs. The song fades to a chorus of someone’s looking with Geldof ad-libbing before the final pay off of Geldof deserving to get kissed once or twice!

A train whistle and a crash of drums introduce Nothing Happened Today. For the Rats, this is familiar territory, with its singing and sing backs throughout. Keyboards and guitars duel with each other vying to set the tone. Watching TV news and looking out the windows in the wake of a hangover there is a urgency to discover what is happening on March 28th , not that there is any significance in the date at all. In the midst of this, there’s the greatly inventive and seamless vaudeville-style break where Harry Hooper’s toupee is discussed at length. The break could be said to be akin to Mr. Kite, of Sgt. Pepper fame.

How about a song on impotency? Keep it Up! Geldof looks to Elvis Costello for lyrical influence, with some nice couplets. The joint song writing effort with Gerry Cott showcases another great guitar solo, The song resurrects the ghost of Howard Hughes in many ways, with the repetition of the ‘Does it Feel Right?..." throughout. Just as the song ends, with an exhausted organ, it burst back into life with some blistering drums, and again Geldof ad-libs all over the Rats chorus of Keep It Up!

Geldof gets personal in Wind Chill Factor, returning to the paranoia hinted at in Can't Stop & So Strange. With a shrill of keyboards, Simon Crowe’s drums break it up and create a stark atmosphere. Then some oh-ho-hos before the now familiar reggae drum break has Geldof coming in after a night of coping. The chorus is almost sinister, and with its whoops and hollers, a disturbing mood prevails. The song revs up into its question and answer session, before Geldof crawls into a corner looking for relief. At the end, the song gives the impression of wind howling beneath high-rise blocks before the drums bring it to an abrupt finish.

After that the mood lightens, with Having My Picture Taken. Essentially the song is a trivial look at the world of celebrity and stardom. Reggae drum breaks punctuate the song and it all jaunts along to the "so fantastic!" middle eight. This song was always marked in its live performance by a thousand instamatics clicking as the band posed for pictures. The song echoes Don’t Believe What You Read from Tonic, this time focusing on the photographers rather than the journalists.

Written by Johnnie Fingers, Sleep (Finger's Lullaby) explores insomnia, and replicates the confused state of mind that ensues. The song is almost epic, with Supertramp pianos in the middle eight, and lots of differing vocal effects. However nothing works, not only wired and tired, and with lights and noise all around. no amount of pills or sheep counting seems to work, but finally the songs drifts off. ....but then comes the nightmarish reprise, with ghostly voices chanting ‘that’s not funny, I’m not laughing, that’s not funny…’. Considering the quality for song writing either via partial or full credits, it is a shame that the other Rats did not contribute more.

In Nice 'n' Neat, it’s Geldof vs. God, and Geldof wins! A really great track inspired by a clerical friend. From the moment the guitar bursts in through to the "final truth is there is no truth", it is a blistering attack on belief. It also hosts one of the greatest guitar solos heard on a Rats song, almost as if Gerry Cott was signing off. However, the unnecessary bop-shoo-wop fade out detracts from such a cutting song. Strange that a song that finishes with "that's all" should be followed by another!

When The Night Comes is another mini-Dublin epic. Frankie instead of Joey or Billy time, but office boys ain’t rock ‘n’ roll and the lyrics lack the flow of Joey or Rat Trap. The flamenco guitar throughout is absolutely wonderful and makes this track well worth listening to.
The un-credited Episode #3 is tacked onto the track after it fades out, to sum it up voice says “That concludes Episode 3, we will return shortly", door slams and washer woman sings. That’s all. (well, it used to be).

The Fine Art of Surfacing though a great album does not quite have the magic of the first two albums. It was another well-produced album; there are no bad tracks, but possibly not enough great tracks. I Don’t like Mondays did overpower the rest of the album being revolutionary as far as the Boomtown Rats were concerned, whilst the rest of the album much more of an evolution of what had take place on Tonic for the Troops.

The Fine Art of Surfacing did not top the charts (unlike its rivals Eat To The Beat or Regatta de Blanc), and was, as far as the UK was concerned, done with in a matter of weeks, whereas Tonic for the Troops spent a year in the charts. At the time there was also a backlash to Geldof in the music press and, to an lesser extent, the popular press. No doubt this affected the album's popularity. Nevertheless The Fine Art of Surfacing is an album that more than matched much of what was happening back in 1979.

In retrospect, this album completed a trilogy of albums all marked by predominately guitar led story telling songs. With later albums bringing the rhythm section to the fore, the Boomtown Rats would never sound the same again or, in my opinion, as consistently good.

The CD re-release contains three B-sides and a live track. It is arguable that the b-sides truly relate to the same period. One is from Clockwork, whilst the other is from Elephant’s Graveyard. And It’s All The Rage which was the b-side from Mondays is omitted entirely.
Late Last Night which is the only track from the era and would have easily fitted onto Surfacing, and enhanced the album. It's a shame LPs only lasted for 40 minutes! The B-side of Diamond Smiles, it starts off with a clockwork introduction, and sounds like a troubled night for Geldof, possibly caused by something he ate. The song is very typical of the Rats of that era with the lyrical guitar solo.

Real Different appears to draw inspiration from Elvis Costello, even down to the Oliver’s Army style piano. It may have been a Surfacing leftover, appearing of the B-side of Elephant’s graveyard. It does sound as if it pre-dates Mondo Bongo and belongs more with this disc. It’s interesting that of all his peers, Geldof seemed to look to Costello more than most, obviously recognising his cleverness, but never quite satisfactorily matching it with the Rats.

From the flip side of Like Clockwork, How Do You Do? appears to have started as a tirade on the record industry, but ultimately descends into Bon Jovi territory saying as long as the band play well on a Saturday night it'll all be OK! Musically the song is good with a great guitar solo, and a crescendo of an ending. Maybe with better developed lyrics this would have been a great song, instead of been merely good to listen to.

The live version of Nothing Happened Today gives a good insight on why the Boomtown Rats were a great live band. Geldof milks the pauses, and the drums are more manic than the recording. The vaudeville break doesn’t sound as good, but remember this is live, and that sort of thing is always easier to mix in the studio.

Beware Episode #3 isn’t what you expect! Now I expected "That conclude Episode #3, we will return shortly", door slams and washer woman sings. END.But no! That's not the end suddenly there is some cackling, and some voices saying "that's not funny, I'm not laughing, that's not funny".... For some unknown reason, the spooky reprise on Sleep has transferred itself to the end of episode #3!!!! This means that despite the running order being as the original album you are required to splice episode #3 and burn it to get the album back as it should be. Grrrrr!!!!

This CD is less essential than either of the first two albums as a re-release as a CD version did previously exist with the correct running order. The album finds the Boomtown Rats at their commercial-peak, with an album that sold right across the world and put itself into more homes than any of its predecessors or successors. To many people, this album epitomises the Boomtown Rats.

Personally, I prefer the first two albums, but I would wholeheartedly recommend this as essential listening as far as the Boomtown Rats are concerned.