Out on the Winding Sunny Moors

Having not spent a weekend at home for the last month or so, and with a trip to Dublin to pay for, I elected to forego my trip to glorious Devon for the Chagstock Festival to see the Rats cause the first storm on the mainland this summer.

From the second hand reports, The Rats played 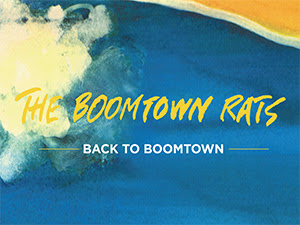 Up All Night - Live At The Marquee - Cork

A large crowd (estimated 2-3,000) turned up to see The Rats play their first gig with Geldof and Briquette in tow since 1986.  After 27 long years, the band played a barnstorming set and created a lot of buzz in the city centre post gig. A very tight set, so much so that Having My Picture Taken got dropped and the mooted Kicks wasn't played, even the new additional verse for She's So Modern was dropped and Banana Republic stripped to the bare bones.  The gig was all the better for it giving the enthusiastic audience some superb entertainment.

Personally, it was a very long day, staying up all night in order to catch the 8am flight back to London. Fcuk knows what happened to my banana.

And back for a second encore before they pulled the plug