Perhaps the only book that tells the story of the Boomtown Rats, from their beginnings through to post In The Long Grass. The first edition of this book ends post-Live Aid. Available again in paperback.

The more or less complete solo recordings of Bob Geldof to date. There are a handful of tracks that are only available on the singles (see Solo Discography) , the most notable omission being Crazy, but this covers the four albums with a smattering of b-sides, previously unreleased tracks, and a version of Sunny Afternoon that only previously appeared on the Ruby Trax compilation. For reference, I have included the original UK/US catalogue number.

As for the albums themselves, maybe I should dig them all out and have a proper listen to them before passing opinion, but it is generally acknowledged that Sex, Age & Death is the most critically acclaimed, and Vegetarians of Love the most commercially successful reaching number 21 in the UK album charts in August 1990 (none of the others charted in the UK).

NOTE : On it's original release as an LP and a CD, there were three tracks that only appeared on CD.

NOTE : Cool Blue Easy and The Original Miss Jesus both appeared on the Koch US release.

This demo also accompanied the release. This is a UK 10-track promotional only CD on Mercury Records packaged in custom card sleeve. 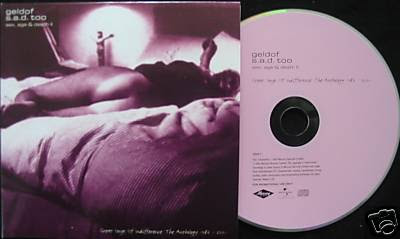