Rats first gig in 20 plus years in Devon.

Hundreds were turned away and left outside the Pigs Nose Inn , East Prawl, Devon for the return of The Rats. A set comprising of early songs and Dr. Feelgood covers went down like a storm. A great night out for those who happened to be on vacation in that part of the world. The rest of us have a few opportunities to catch them in August and early next year.
at 9:00 pm No comments: 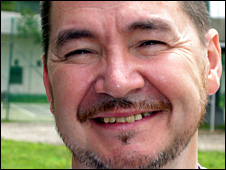 He shakes his head: "Not yet. Bob Geldof was over here recently and we had dinner. It was the first time I'd seen him in 20 years - but he mainly wanted to talk about the G8."
at 3:30 pm No comments:

Bobby Geldog in the Wizard of Cott

You just can't keep the Rats out of the news these days......

Toto is played by Bobby, a West Highland terrier who has something of a showbusiness pedigree - he is the protege of former Boomtown Rats guitarist Gerry Cott.

Mr Cott, who founded the group with Bob Geldof but quit before their fifth album was released, has coached Bobby to perform tricks that leave audiences open-mouthed

Mr Cott, 55, who lives with his wife Cathy and sons Harry, 19, and Sonny, 11, near Leatherhead, said: 'He has integrated so well with the cast because he is so calm and relaxed.

Our method of training works on the dog's character and confidence, which means they can be comfortable even on stage in front of hundreds of people.

'It was a little unfair of him to muscle in on such a lovely moment in the play.'

He and Harry, who is working as Bobby's chaperone during the show's run, spent a week integrating the dog with the cast and teaching Sian Brooke, who plays Dorothy, a series of silent cues to prompt his performance.

Mr Cott, who was born into an Irish farming family, said he enjoyed working with animals and that his time with the Boomtown Rats had helped him gear his training towards the film, music and television industries.

He said contrary to some rumours, Bobby was not named after Geldof.

The Cotts, who own dress designing company Phoenix Cobham as well as running Dog Training One2One and A-ZAnimals, have helped coach thousands of animals using an American training method Mr Cott refers to as 'dog whispering.'
at 9:00 pm No comments:

His last scheduled date this year. Unless he's planning to join the Rats......
Expect the usual of undue amounts of solo material and a rendition of I Don't Like Mondays.