Dates for your diaries 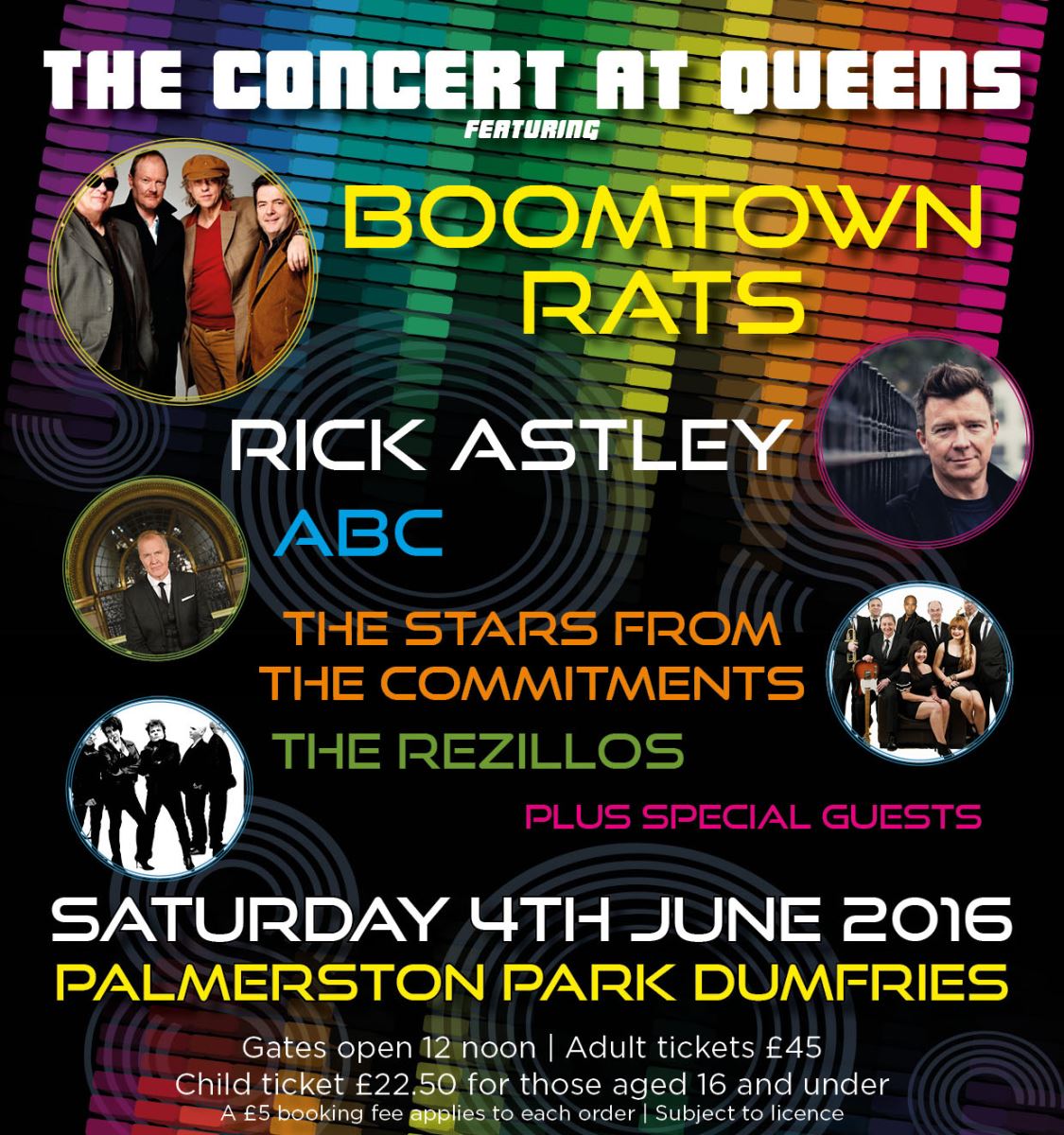 The singer, who appeared with his band the Boomtown Rats on Sunday evening (July 16) of the three-day event, offended festival-goers so much several left before his most well-known hit, I Don't Like Mondays.

He then stopped after one song and began a tirade comparing the family event to a rock and roll concert.

"Brentwood, we are the Boomtown Rats," he screamed.

Referring to one of his band, he said: "This [guy] who you'll remember as a slim handsome young ladis wearing a **** off purple suit with an elasticated waistband so that when he gets even ******* fatter you won't notice. On the other hand Brentwood, you are wearing wall to wall ******* Primark. This is a rock and roll festival. When you come to a rock and roll festival you dress for a rock and roll festival. You can never be too careful. That song we just did was written at the end of 1975 when Margaret Thatcher became leader of the opposition. What are you booing for? We're in ******* Brexit land here guys. Yeah, we're Irish, we're still in Europe. It's just as well we wrote that song because this year is about Theresa May. She's gonna do you in. There's always someone looking at you Brentwood."

Later, during a performance of I Don't Like Mondays, he paused and stayed silent for 90 seconds.

One festival-goer, who left with her husband before the finale said: "They sounded pretty dreadful, especially after just hearing the fantastic voice of Tony Hadley, and of course they have a very limited back catalogue. We were just thinking we probably wouldn't bother staying to hear I Don't Like Mondays as it didn't look like it would be worth the wait when Bob launched into an extraordinary, expletive laden rant. As he launched into another dreadful song, we, along with hoards of others, headed for the exit and I found myself in a queue to leave in the middle of the headline set. All around you could hear mutterings from fed up festival-goers of how disgusting he was and 'how dare he'. It was a shame he had marred what was otherwise a fabulous day out."

Festival co-ordinator Laurie Edmonds apologised for the language, but said it was "part of the act."

She said: "They're a punk band. You expect them to be a bit controversial and he got a reaction from the crowd. People know he speaks his mind. That's just what they do but they were a fantastic punk band and we thought it would go down well with our crowds. We know he's a bit of a lightning rod and people will have strong reactions to him."

She explained that organisers had made a conscious decision to put the act on post-watershed.

She continued: "We were disappointed that there was so much swearing. We want this to be a family event and it would have been nice if it was toned down. Some people who felt it was offensive made the decision to leave. We're truly sorry if people were offended. It wasn't our intention in booking them. We have had a couple of complaints but we've equally had people saying they were one of the best sets all weekend. There were still several thousands of people who stayed to the very end and were asking for encores."

The Boomtown Rats play the racecourse at long last

They were the shows that never happened. Now, nearly 40 years after Bob Geldofs band were meant to play at Leopardstown, the group are finally taking to its stage.

It was February 20th, 1980, when, as RTÉ reported, hundreds of fans mobbed the band as they walked from the tarmac to the airport terminal. Such was the clamour around King Rat that Geldof became isolated for a while from his chauffeur- driven Mercedes.

For their glorious homecoming the Rats had sold all 7,500 tickets for two shows at Leopardstown, to take place on February 22nd and 23rd.

As he had done more than his share of annoying, criticising and provoking the great and good of the land, it perhaps came as no surprise that the District Court refused to grant a licence for the Rats homecoming shows.

But far from being degenerate punks, the six-piece Rats were all nice middle-class boys from Glenageary, in south Co Dublin, and it was at Blackrock College, not CBGB, that some of them were educated.

While Geldof held court in Blooms Hotel, telling journalists that he had been vilified and banned from playing in his own shoddy and second-rate country, it became clear that the siege of Anglesea Street wouldnt be lifted until the Rats were allowed to play.

On March 2nd, 1980, Geldof strode on to a hastily erected stage at the castle and waited for the screams of 10,000 fans to abate. He grabbed the mic and said just two words: Who won?

Coming just a week after the EU Referendum result left Sir Bob Geldof crestfallen, The Boomtown Rats’ performance at Godiva Festival offers him the perfect chance to instigate a righteous anger in the crowd.

From targeting Theresa May and her campaign to lead the Conservative Party in between songs, to rallying the thousands in the crowd in War Memorial Park to try and make a change in the establishment, the 64-year-old singer exhibits an energy which undermines his age.

On a rain-soaked Friday night at the three-day music festival, The Boomtown Rats take to the stage shortly after 9.15pm, with legions of nostalgic music fans in attendance soaking up the atmosphere.

There’s plenty on offer for them, too, besides the sight of an iconic punk rocker who has given the public everything from ‘Like Clockwork’ to Live Aid.

Taking to the stage after an expletive-laden introduction video, The Boomtown Rats are on top form, lapping up the crowd’s appreciation as Geldof struts around on-stage like a born performer.

Offering an explosion of energy which puts many of the younger bands on the opening night of the free-for-all bash to shame, The Boomtown Rats display a tight musicianship as the clouds darken and the night draws in.

There’s plenty of hits for the fans to enjoy - and that’s unsurprising, considering the band crafted nine Top 20 UK singles during a creative purple patch of songwriting in the 1970s and 1980s.

Sir Bob remains the centrepiece of the outfit, capable of drawing you in with his vivacity as Pete Briquette, Simon Crowe and Garry Roberts help the iconic punk rocker air tracks from all six of the band’s studio albums.

The highlights range from ‘Like Clockwork’, the 1978 single which reached number six in the charts, to classics ‘I Don’t Like Mondays’ and ‘Rat Trap’.

The latter sees him spitting “I’m neither here nor there”, but you get the impression Geldof is exactly where he wants to be - issuing a call to arms for the masses, amid a politically turbulent period which makes Netflix series House of Cards seem almost tame.

‘Banana Republic’, meanwhile, sounds stadium-sized in the open air as The Boomtown Rats inject a cool rhythm to proceedings after thanking Coventry for spawning legendary 2-Tone band The Specials, who hit the charts at a similar time to the ‘Someone’s Looking At You’ outfit.

Of course, the set highlight - perhaps predictably - comes in the shape of ‘I Don’t Like Mondays’, the 1979 number one single which hit the chart zenith after being written in response to a Californian school shooting.

The song sounds seismic in the night sky, with revellers hollering the chorus back at the Live Aid creator as the realisation kicks in that a fantastic weekend in Coventry has just started.

Around 4,000 people had a weekend to remember when The Boomtown Rats headlined a music festival in a small Nottinghamshire village.
The band requested to play at the festival having seen positive online reviews.

The band performed at Wellowfest, on a stage that itself was used at Glastonbury.

They had requested to play at the festival, staged in Wellow, near Ollerton, after seeing positive reviews of the event from previous years.

Once Sir Bob had drawn the audience's attention to his fake snakeskin suit, and told the crowd they all looked like they dressed at Primark, the action was under way.

The band put in an energetic performance full of gusto and vigour backed by an in incredible psychedelic light show.

Sir Bob sand, played harmonica, and bashed the tambourine, making the stage his own, while the band kept the audience at fever pitch.

The only words that fell on deaf was when Sir Bob encouraged the crowd to take their clothes off.

The Boomtown Rats reportedly sparked a walkout after lead singer Bob Geldof told members of his audience they were wearing “wall to wall f*****g Primark”.

Geldof and his band headlined The Brentwood Festival in Essex on Sunday evening.
During their performance, the singer and activist gave an explicit-filled address to the crowd.

“We are the Boomtown Rats,” he shouted, before launching into a speech about outfit choices and 'looking rock ’n’ roll'.

“We are mega, you are Brentwood. How do we know that you are Brentwood?” he asked. “I for one am wearing a f*** off pretend snakeskin suit,” he said before pointing to his bandmates who were wearing “cowboy shirts” while another wore “a purple suit with elasticated waistband.”

The charity campaigner also issued a political warning about the new Prime Minister Theresa May and Brexit.

“You can never be too careful. That song we just did was written at the end of 1975 when Margaret Thatcher became leader of the opposition,” he said.

Responding the crowd, he continued: “What are you booing for? We’re in fucking Brexit land here guys […] It’s just as well we wrote that song because this year is about Theresa May. She’s gonna do you in,” he shouted.

Some members of the audience reportedly decided to leave the show after Geldof’s ranting.

“As he launched into another dreadful song, we, along with hoards of others, headed for the exit and I found myself in a queue to leave in the middle of a headline set,” one festival-goer told the Essex Chronicle.

Festival co-ordinator Laurie Edmonds apologised for the language and confirmed to the paper some people chose to leave as a result of the bad language.