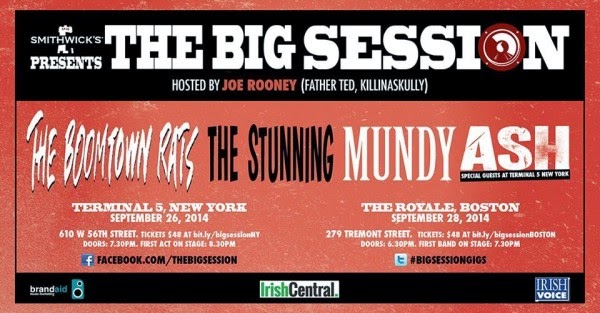 By Miriam Coleman | September 28, 2014
The Boomtown Rats played their first U.S. show in more than 25 years on Friday night, taking the stage at New York City's Terminal 5 for Smithwick's Presents the Big Session. During the show, the Irish punk band, who originally broke up in the mid-1980s, revisited their somber 1979 hit "I Don't Like Mondays."

Despite the dark content of the song, which was inspired by a school shooting, the performance turned into a warm crowd singalong, with a chorus of cheers erupting during the dramatic pause after the line, "the lesson today is how to die."

Frontman Bob Geldof spoke with Rolling Stone about the Rats' reunion in 2013, when the band first reunited for shows in the U.K., Ireland and the U.A.E. Although he observed that the sour economic conditions that originally gave rise to bands like his were repeating themselves three decades later, he questioned whether rock could have the same social impact today. "The rock & roll era has passed," he said. "It’s over. So [our reunion] won’t have, I think, the same sort of cultural value. It’ll have a nostalgic value, I guess, but that’s not good enough for me. I would like it to be about these times now, addressing 18-year-olds. A rock festival shouldn’t be a middle-class outing, it should be a gathering of the clans, with intent."

The Boomtown Rats will play one more U.S. show at Boston's Royale on Sunday night before heading to the U.K. for a string of tour dates running through November.