The first single release from the Boomtown Rats back in 1977, was a misleading statement of intent. Though it sounds personal, it truly isn't.

"'Number One' was more general. It was a quintessential seventies song - for the 'me' decade... It was not a personal song..... It was a manifesto in one sense and it was about the pervasive selfishness of the time which was beginning to tire me." - Geldof

Fuelled by Geldof's experiences of growing up in a pre-Celtic Tiger Ireland, there is an anger and kicking back against the situation Geldof found himself in back in 1976. Geldof rarely expressed his inner feelings (except possibly on later recordings such as Sex Age & Death) and in this song he takes on an opinionated guise. Some of the sentiments are Geldof's, some ain't. You just need to read between the lines. Geldof writes this song as the anti-Lennon, no peace, no love, no brotherhood of man. He sticks two fingers to the world, and claims he's gonna take it all. Especially the cash. So obviously some elements of truth in there!

The world owes me a living
I've waited on this dole queue too long
I've been standin' in the rain for fifteen minutes
That's a quarter of an hour too long.

"Twelve months after picking up my dole, going home and writing that song, it was in the Top 20.Weird life. The boy behind me in the queue was called Johnny Fingers. I started talking to him cos he was wearing pyjamas in the rain. He became the piano player." - Geldof

"Soon after I got back from Canada I went down to Fitzgeradld's bar and met Gary Roberts... He was drinking with Johnnie Moylett." - Geldof

Don't believe what you read ? Geldof may well have been in a dole queue at some point, but his life pre-Rats suggest he was well travelled and quite active, working on the roads in London, teaching in Spain, moving to Canada to be a journalist, setting up a free-ad news sheet and working in an abattoir in Dublin. Some lovely word play in the verse condensing the phrase"An Hour Is Sixty Minutes Too Long" into a mere fifteen minutes to highlight the urgency and impatience.

I'll take all they can give me
And then I'm gonna ask for more
Cos the money's buried deep in the bank of England
And I want the key to the vault
I'm gonna take your money
Count your loss when I'm gone.
I'm alright, Jack,
I'm lookin' after number one.
If I want something I get it
Don't matter what I have to do
I'll step on your face, on your mother's grave
Never underestimate me I'm nobody's fool

"Most people get into bands for three very simple rock and roll reasons: to get laid, to get fame, and to get rich." - Geldof

Here Geldof does state his intent. He is on the make and on the take. He's had enough, and he wants your fucking money!

"It was all punk bravado, but it was a statement of intent. It was my way of saying, I'm going to be me. I'm not a wanker, you cunts." - Geldof

Geldof shows he despises the common herd and wants no part of it. Rather than while away hours in the Dublin bars discussing the problems of the world but not actually doing anything about it, Geldof wants to get going and do something. Time to not be like anyone else. At all.

"Intellectually I resisted, but though logic stripped away the cant and ceremony I still could not rid myself of the voodoo." - Geldof

Geldof here bashes Catholicism. Seeing the church as the oppressor, he dismisses its stupid ideas. Yet still they get in the way, Catholic guilt no doubt.

"No man is an island, entire of itself; every man is a piece of the continent, a part of the main; if a clod be washed away by the sea, Europe is the less...any man's death diminishes me, because I am involved in mankind..." - John Donne

Geldof cleverly inverts the John Donne poem to cast himself adrift of the masses for the final pay off that he's going to help himself and no one else.....


...and famously ends up totally contradicting this whole song within ten years.

Geldof normally casts himself as an observer and critic in his songwriting, yet here he adopts another persona fearful of revealing his true self. Kicks sees Geldof revisit teenage frustrations, so he was to do this again.

Still the last word from Geldof on the inspiration behind one of the Rats' finest moments....

"Dr Feelgood were absolutely central to the Rats. When I heard "Down By The Jetty", it just fucking Blew. Me. Away. I still have it in the car. The Feelgoods and R&B were it for me. Our early live set used to be their entire first album and that was pretty well it. So "Looking After No 1" was my attempt to write a Feelgood's song at about 90 miles an hour." - Geldof 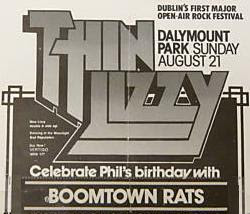 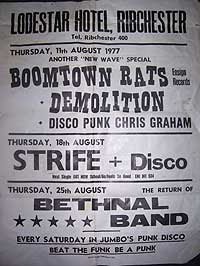 Support from Demolition, and Disco Punk Chris Graham (surely not the boomtownrats.co.uk webmeister!)
at 8:00 pm No comments:

support The Darts
at 8:00 pm No comments: