Simon Crowe and Johnny Fingers formed Gung~Ho featuring Simon on lead vocals in 1987.
They released a single, Play To Win, which was pretty good though it failed to have any impact on the charts.

And followed it up with Remember, which was less than memorable! (couldn't resist)

An album called 10 was d recorded and ready for release, but Magnet, their record company, went bust and the album disappeared bar a few demos that made their way into collector's hands (not mine, I hasten to add). 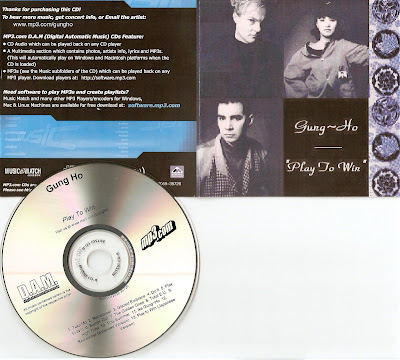 However, many years later the album appeared on mp3.com with extra tracks on a CD with both the audio and the mp3 version of the album. Frankly, they should have stopped with the Play To Win single. The abum was very insipid and maybe it was a good thing Magnet went bust.
Obviously for Boomtown Rats completists, this was a very important release, but for me it would rank even lower than Deep in the Heart of Nowhere in the post-Rats repertoire that I have heard.
It was a collection of unmemorable songs with very simplistic arrangements.
It's more or less impossible to get hold of this these days, Gung~Ho having disappeared from mp3.com.
Simon and I had a lot of good times making this album. It was fun. The song writing came effortlessly. It was a great relief not to have to rehearse songs at a band practice, which can be brain damage at the best of times. Also, Yoko had never been in a studio and so she created a lot of extra energy. Bob Clearmountain called and said he loved the songs and could mix some tracks between Bruce Springstein's album and David Bowie's new record. This made Simon and myself feel a little embarrassed, as we had decided to produce the album ourselves and being scheduled between two musical icons didn't boost our egos but worked in reverse, making us feel a little shy and nervous.We hopped around various cheap studios in London. We were mobile, just the three of us. Yoko seemed to always find a cheap Japanese restaurant nearby. By the time we started mixing the album at The Right Track Studios in New York with Bob Clearmountain, we were very proud of the album. Clearmountain fortified this confidence, I must add. Chuck New mixed the remaining tracts at Battery Studios.A week later , we went to Thailand to do " THE VIDEO" , convincing the director it was the only place in the world where the lighting was right. Mind you it didn't take him long to agree. About one millisecond...... I think.
Kind regards,
Johnnie
at 5:59 pm No comments: