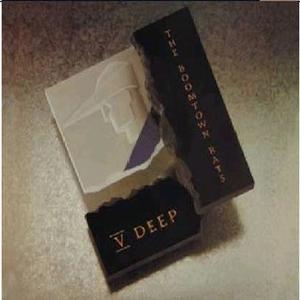 The musical landscape has moved on by the time of the release of V Deep. V Deep refers to a Japanese style of love making, "four shallow, five deep", but with it being the fifth album and the Rats only having five members it can be interpreted in many ways. It was an era of Bananarama, The Fun Boy Three, Haircut 100, Duran Duran and ABC dominating the singles charts. Peers like The Jam and The Stranglers were around but sounding very different. The album pretty much takes up where Mondo Bongo left off, continuing the experiments in sound. Gerry Cott had left the Rats by the time they came to record this album. This was not a great surprise given that he had been under utilised on Mondo Bongo. Godley & Creme were initially down to produce the album, but in the end Tony Visconti once more took the helm.

Based on an obsession with celebrity and the tabloids, He Watches It All is an outstanding track. The keyboards are alive and there is a sense of foreboding as we are drawn into the lonely viewer’s world. And then we get the sense of loss as it is all taken away. Then we get the "Did you read it in the Sunday papers?" break bursting the song into life with its vocal harmonies from A Day In The Life. As this dies down we get the pay off of having bought and sold the video and somehow made a fortune in between. Without saying a lot, the song conveys many moods and colours, without being too radical a departure. If only the Boomtown Rats had made more tracks like this. Outstanding.

The first single off the album, Never in a Million Years, failed to make the top 30 (in fact, it only reached 62!). One of Bob Geldof's weaknesses in his lyrics has been their mawkishness, and this song was one of the worst offenders (Another Piece of Red was far worse though). The lyrics included a lot of lazy clichés (including the title) and said nothing of any worth. Sonically it was fine, a re-creation of Spector's wall of sound, it sounded great on the stereo, but lacked real presence on the radio.

The only hit single from the album was House on Fire. This was a return to the reggae tinged sound that made Banana Republic a massive hit. Far lighter and daffier than Banana Republic, the feel and vibe of this track worked really well with Geldof's voice. There is some great lyrical dexterity shown. It sounds loose and free-form, but most crucially it sounds great! The album version is extended and all the better for it. ...House Burned Down is essentially just an instrumental reprise.

Musically outstanding, A Storm Breaks is another good track. It starts of with a beat not unlike Blind Date, and then kicks it with a guitar riff before some ghostly vocals over a funky guitar. Then brash horns come throughout sounding as if they came from Haircut 100. The percussion is African/Latin in the style of much of Mondo Bongo. Towards the ends, it’s as if the Rats have transplanted themselves into the midst of the Rio carnival with whistles blowing, bongos and a driving bass from Pete Briquette. An instrumental version appeared on the B-side of Charmed Lives and was even better!

Starting off almost like Antmusic with clicking drumsticks, The Bitter End then layers sound with guitars and organs and sounds Asian, almost like a Bollywood track. Only the sitars are missing. One of those tracks where the full gamut of the Rats’ arsenal is used, including some great guitar work from Garry Robberts.

Up All Night is decent, though repetitive, incredible how many times "Up All Night, ooh za za" is repeated. A rip of Drive my Car from The Beatles in its adaptation of the "beep beep yeah" refrain, and the break reminds you of Bowie. Very sparse as far as the music is concerned, with a dominating drum beat, and lots of hand claps, as well as some overdone backing vocals.

The Little Death is a brave departure into jazz. Making heroin analogous with the female orgasm is a strange idea. Jazz-by-numbers, at times coming across as Stray Cat Strut, it is a sinister sounding track. Would have worked well in the quieter moments of a musical like Chicago!

Epitomising the very worst of the Boomtown Rats, Charmed Lives is not only lyrically poor, it sounds out of tune! Horns blast in all over the place, keyboards waft around, drum beats are randomly inserted and harmonies interject when least expected. When Geldof goes on about doing his hair tonight, you know it’s all wrong. The infernal "we’re OK, they’re OK", get progressively annoying as does the na-na-nas. It was even released as a single. Mercifully, it did not appear on the recent Best Of.

Geldof talks dirty in Skin on Skin but who cares? In the midst of the song, Geldof returns to the free form lyrical indulgences of Mood Mambo, but a quiet night time London is dull, and it ambles along. Overall the track is shrill, and for a track about sex, is very sterile and lacking in any passion. More like a visit to a sperm bank than a night of hot passion between velvet sheets.

Talking in Code starts with the sounds of tuning in the radio, and turns into a science lecture on body language! The high-pitched vocals in the chorus have to be heard to be believed. It’s as if someone grabbed Simon Crowe in the nuts! Had the Buggles or Thomas Dolby made it, it would have been crass; but this is the Boomtown Rats, who once looked to get their kicks from smokes and drinks and you!

When V Deep is good it is very good, but some of the efforts to find something new flounder on the rocks. Horns, keyboards, drum and bass are to the fore, the previously guitar led new wave sound long gone. Had the best parts of V Deep been combined with the best parts of Mondo Bongo, the combined effort would have been the Rats finest hour. As it stands, it is a brave album which sounds great, but three or four bad tracks let the album down badly.

...House Burned Down has disappeared! OK, it was little more than a reprise of House on Fire, but with Mondo Bongo retaining Cheerio, and Surfacing listing Episode #3 as a track, it's amazing it doesn't appear.

The running order has changed but to the overall benefit! He Watches It All is a great start, and although it descends from there, it is far less jarring than the original release.

One of the really worthwhile extras on all the CDs is House On Fire (12" Dub Version). Essentially, it is the original 7" single until it suddenly breaks into an extended dub mix which enhances the vibe of the song. It would have been good to have had the original 7" version as well. Can never get enough of a good song!

Say Hi To Mick is a semi-acoustic song about dreaming about retiring to New York City from some cold outpost and listening to channel KGB on the Radio. Hard to describe, but if anything it sounds like Geldof’s bash at Simon and Garfunkel!

The b-side of Charmed Lives, No Hiding Place was a far superior track. Sounds like a theme from a Gerry Anderson puppet series with its Hank Marvin guitar and driving bass line.

Up All Night (Long Version) is just an extended version of the album track, as the mumbled introduction tells you "extremely long"! The sound isn’t quite as full as the LP version, as if some keyboards and guitars were removed. Unlike House on Fire, the extended version doesn’t add a great deal to the song.

Incredibly, V Deep was (and still is) the only UK album to have been released on CD with its original track listing. The latest release is mainly worthwhile in providing the extras on CD for the first time and the fact it sounds a lot better thanks to the re-mastering. However none of these tracks are new as they have all been available on vinyl.

Personally, I find that I rarely listen to V Deep as an album which is a shame as there are some very good tracks on it, but tracks like Skin on Skin, Charmed Lives and Talking in Code really turn me off it.

But there you go, you can’t be all things to all men, and any band worth its salt will always disappoint now and again. As ever with the Boomtown Rats, there is always plenty of good, and there are some gems on V Deep that are well worth sticking on your iPod!
at 11:01 am