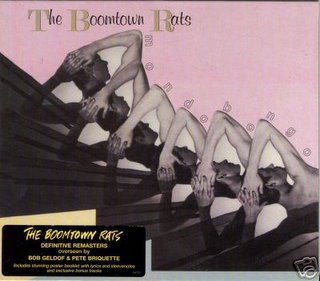 Mondo Bongo was highly anticipated. The early signs were very encouraging. Banana Republic was a smash hit single usurping the heavily hyped Spandau Ballet. The reggae sound seemed to suit the Rats, and the album promised a very new sound. Mondo Bongo was a very strange brew in contrast to the three previous albums. It turned out to be a more experimental album than expected. Having lined up Tony Visconti as a new producer, The Rats were breaking away from the sound of Tonic for the Troops and Fine Art of Surfacing that had been so successful.

With a sassy burst Mood Mambo kicks off the LP. Geldof raps about a black snake with slicked back hair looking for someone else, and being in the mood to mambo! The raised expectations are then dashed by the repetitive crazy bongo chant, every time we're in the mood to mambo. The song is very camp with it's yoo-hoos and references to ballroom dancing. Very Latin influenced driven by the rhythm section rather than the guitars of previous albums. It is a dark hint of things to come.

Then we have the sleigh bells! This is My Room starts off as if written to corner the Christmas market, but slowly develops into a great track. There is no urgency to get to the lyrics, and there is time to appreciate the music, before Geldof booms "This is my Room' to a peak. The songs fades out far too soon, but always better to go too early than overstay your welcome!

The mawkish, Another Piece of Red is a lament on the demise of the British Empire. It seemed particularly hollow being sung by an Irishman. Toe curlingly embarrassing at points with its tinkling piano refrain of Rule Britannia throughout and some of the crassest lyrics you would hear anywhere ("hungry for India" , yuck!, "vive le Canada", come on!)

After that comes Go Man Go which is one of the highlights on the album. There is a sense of drama from the drums and keyboards in the intro. The first verse describes a day at the seaside, and the second relates to Japanese culture, even down to some cod-Japanese. The sax solo breaks up the song and fades it out.

Under Their Thumb showcases various instruments in the break. The sort of device used live to thank the various members of the band. Otherwise the song is a re-imagined version of the Stones hit referring to us all being under the thumb of government rather than a girl under Jagger’s thumb! Pete Briquette’s bass drives the song along really well.

Elephant's Graveyard was released as a single, and only reached the lower reaches of the top thirty. It's not a bad track, though maybe not ideal single material. The song is a traditional Geldof tale, this time of riots in Miami, of what it must be like to be a pensioner when all hell breaks loose. The wordplay reminds you of Elvis Costello, and the ‘Guilty til proven Guilty’ is a great line and pervades the song. The ‘shame shame shimmy shame’ fade out is a bit crass! Lots of really good keyboards throughout, but like office boys, pensioners ain’t rock ‘n’ roll!

Banana Republic was written in the aftermath of the Rats being banned from playing in Dublin. Police and priests rule ( a take on Police and Thieves from Junior Murvin & Lee Perry), and hypocrisy abounds. There are even references to the IRA, "Price. a bullet in the head". The final line of "it’s a pity nothing’s changed’ sums up the continued intolerance of a notion dominated by the Church. The most venomous lyrics and the great vibe of the song make you wonder how the Rats were dismissed as lightweights. It is to Ireland what God Save the Queen was to Britain.

The jewel in the crown of the album is Fall Down, to be appreciated in all it's glory. It is probably the most stunning Rats song ever. Sung by Simon Crowe, it is a beautiful song expressing how hurtful love can be. Maybe it was too personal for Geldof to sing but it really suits the choir boy vocals of Simon Crowe. Criminally, the clarinet solo was not on the recent best of, and even worse the song was omitted from the US version of the album.

Starting off like That’s Entertainment, Hurt Hurts recalls Can't Stop from Tonic from the Troops. No story, just the expression of agony, and some catchy lines, "Hard side, Tough inside, She cut you with stiletto style", not unlike Straight Up. The instrumental break has echoed drums and church organ keyboards before it breaks into one of the few lyrical guitar solos on the album. Use of acoustic and electic guitars like Someone’s Looking. Another nice track that would have been right at home in Kill Bill.

The Shadows-esque instrumental Whitehall 1212 pretty much wraps things up. Starts with a phone call to Blake of the yard, recalls Apache, and winds up like Night Boat to Cairo from Madness. And then leads into a hidden track (titled Cheerio on the CD release). Quite amusing little Dylan-style ditty of no substance.

Mondo Bongo is a roller coaster of an album with some good highs, and some pitiful lows. Sonically it is an improvement, but the calibre of some of the songs leaves a lot to be desired.

The rhythm section dominates the album throughout and there are precious few guitar led tracks. Banana Republic aside, there were no other great singles on the album. Whereas Tonic for the Troops could probably have had another couple, and even Fine Art of Surfacing may have yielded another, it was hard to see a sure fire follow up single, though Go Man Go may have troubled the top twenty. Fall Down, great as it is, would have been a big risk as a single, but it could have been a number one (or number 100!).

There are at least half-a-dozen very good tracks on this album, and had the Rats come in with more material like that (probably some of the stuff used on V Deep) it could have been their finest hour (well, forty minutes!). There is enough to make this worthwhile, but new listeners will require patience.

It is important to note Fall Down is free of the echo you get on the groove crammed LPs. At last, I can hear it properly! And it is the full version, not the edited version on the Best of.

Whitehall 1212 is also on CD for the first time, but that's not so essential.

As far as the extras are concerned if one version of Another Piece of Red isn't enough there is also a live version provided as an extra. When the piano starts the song, the crowd cheer, no doubt anticipating I Don't Like Mondays! Needless to say the live version is no better, a bad song is a bad song.

There is also the Buddy Holly tribute Don't Talk To Me, uh-oh-ho! It was included on the US version of Mondo Bongo. It’s OK, fairly inoffensive, and my dad would love it being a big Buddy Holly fan!

There is also a cover of Arnold Layne. It's fair to say that the Rats don't do this song justice. They murdered it! It sounds out of tune with lots of synths crashing it. You’ve got to hear it though!

Up All Night did appear on the US version, but as far as the UK is concerned was on V Deep. Man at the Top, the b-side of Banana Republic, would have been a good extra.

The fade out of Banana Republic is extended from the single and in all honesty doesn't enhance the song.

With a jumbling of the track sequence, and some less than inspiring extras the CD re-release of this album is mainly worthwhile in obtaining the UK track listing, and especially the unabridged Fall Down, on CD for the first time.

Personally, though not my favourite Rats album (not the worst either!), it has some inspired tracks and is well worth a listen.
at 11:00 am

Rats played here in Bongos over Britain tour
at 8:00 pm No comments: