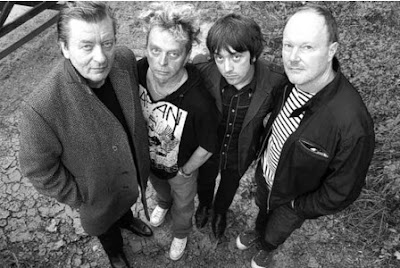 
The Rats played Blackheath Halls with more than able support from Eddie & The Hot Rods.  Pete Briquette was in the audience to see The Rats play (or not as the case might be) the following from the set list...


Attendance was a little sparse as far as the audience was concerned in the 1,000 capacity hall. A few enthusiasts at the front, a few sat at round tables like a wedding in the middle, a few lurking at the back and a few at the bar.

How to Compose Popular Songs That Will Sell (again)

The signed How to Compose Popular Songs That Will Sell Deluxe Edition  will be released on 6th August 2012 and be strictly limited to 300 copies worldwide.  Adds a few bells and whistles to the original release, most notably the bonus DVD containing the excellent I Am Bob and the Systematic 6-Pack video and making of.  So if you have £60 spare go and treat yourself.

What you get for your fucking money (apart from Geldof's signature) ...

'How To Compose Popular Songs That Will Sell' CD Album
Tracklistings
1.How I Roll
2.Blowfish
3.She's A Lover
4.To Live In Love
5.Silly Pretty Thing
6.Systematic 6 - Pack
7.Dazzled By You
8.Mary Says
9.Blow
10.Here's To You
(Hidden- Young & Sober)

Geldof will be releasing a live CD on Monday 14th May 2012 exclusively available on www.bobgeldof.com for £15 plus postage.  It will also be on sale on all of his tour dates excluding the festivals. The CD will not be available in any shops nor available to download. Only 1000 copies will be available.