In The Long Grass 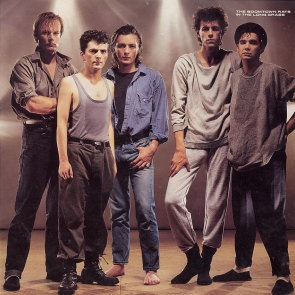 Just when you least expected it, The Boomtown Rats returned with another great album! With barely enough money to make the album, and following the less than wonderful Mondo Bongo and V Deep, In the Long Grass marked a return to form. Though not commercially successful, it spawned some great singles (none of them were hits), and was the most consistent album from the Rats since the Fine Art of Surfacing.

The first single off the album, Tonight has a reggae beat, some lower key vocals and a sassier attitude than would have been expected from the Rats. Not as overt as say Banana Republic or House on Fire, it promised a lot from the forthcoming album. Horns dominate the music, showing the Rats with just a single guitarist had other means of filling out their songs. Of course, no one bought it!

Drag Me Down was another great single. Geldof and Crowe exchange vocals in the introduction before a swirling keyboard kicks the song into life. Some great horns kick in at the end of the verses. One of the most driving songs from the Rats, with really good guitar work for Garry Roberts. The horns that play out at the end are similar to those on House on Fire.

Dave was one of the best singles the Rats ever made. It plays as a plea to a suicidal friend to reconsider, and implores him to keep going. That it never troubled the charts is purely down to low regard the Rats were held in by the press & public, and a shambolic re-release involving singles with embedded tickets! In America, they had to rewrite the lyrics, as the notion of a man singing about another man was deemed as faggy by the record company, and turned it into a song about Rain. Oh dear!

There are two tracks penned by Johnnie Fingers. A wistful sax and tinkling piano begin Another Sad Story, before the sax blasts in. A story about Johnnie and Susan, though not of the ilk of Geldof’s earlier Dublin trilogy, but much more generic. The middle eight is from Bowie’s Let’s Dance period, Geldof affecting his best Anthony Newley voice. The sax solos break up this song, and provide a link back to Joey and Billy of yesteryear.

Also from Fingers and starting off with a guitar from Atomic.Lucky has Geldof telling you how lucky you are if time remembers you. The song namechecks JFK, and tells you what went wrong for him! This isn’t an Eva Braun, as the song is more personal than that addressed directly to the listener. The ‘work’ chants remind you of Chain Gang, and the song finishes with some dubbed horns.

Aaaaah, not Chic’s Good Times, but The Rats’ Hard Times! There are some yeah yeahs from the Beatles in there, and a simple little Depeche Mode little keyboard (think Just Can’t Get Enough, not Personal Jesus!). The songs builds and builds and then bursts into life with Geldof singing over some female oriental backing vocals (Molly & Polly!). Hard Times sound good with The Boomtown Rats!

Pete Briquette and Simon Crowe contribute the wonderful Up and Down. The Chic guitar is there, and the vocals are urgent, and it even gets ska-like at points, probably more Police (Material World) than Specials but it’s certainly there. Twice it breaks into the glorious ‘lying in the sun’ with the horns blasting out. The song comes down when nothing seems to changes, but only to get on with some urgent ad-libbing.

There is a low key start to Over and Over with Geldof mumbling before it breaks into a joyous chorus with some great tenor harmonies. A lovely flamenco interlude reminds you of Zorro! A shimmering low key fade outs the song. Another gem!

With its Latin intro, Icicle in the Sun starts off as if it dares to take us back to Please Don’t Go from Mondo Bongo. It turns out to be a far more pleasant experience. Possibly the most eighties sounding track on here with its funky guitars and keyboards interjecting throughout. At one point, the song threatens to break into a good old pub sing song, but keeps on track.

But the last word on this album is A Hold of Me. The song fades in gently and builds to Geldof cutting in with "What’s the Story?…" The song builds and builds with a series of questions, layering the sound until the chorus arrives and then the song dips again. In many ways this is the song that Never in the Million Years should have been. As Geldof implores "I’m for people, I’m for life!" it’s the perfect bookend to the Rats’ singles career. This song marks the arrival of selfless crusader who has long left his selfish youth behind.

Garry Roberts now had a guitar sound for the band, and the songs were all well written, performed and produced. More ideas than narrative in the songs, but there isn’t a bad track to be found. This was the realisation of the experimentation of Mondo Bongo and V Deep. The sound was less produced but no worse for that, and this was a more mature album than any that had gone before.

Sadly, this album was also the last The Boomtown Rats recorded. A great swan song, but lack of commercial success and the aftermath of Band Aid and Live Aid, led to Geldof striking out as a solo artist.

Walking Downtown returns to the jazz-by-numbers of The Little Death, and is little better. Part Mood Mambo, part jazz, there is the gnawing feeling that this was another attempt at something that was beyond the Rats. The piano in the song puts me in mind of Singing in the Rain! I have never really liked jazz anyway, and this song is of little appeal. P

recious Time is a track that would have been a great addition to In the Long Grass. Doo do dos courtesy of the Rolling Stones and a Pete Briquette bass line get the song going along with Chic-like guitars are also there. On the two middle eights, Geldof drifts into a Bowie tribute again, aping China girl. The instrumental gets funky, so much so it does sound like Nile Rodgers & Bernard Edwards had a hand in the production. The guitars that play out as from the Let’s Dance Bowie period as well.

There’s not a great deal to She's Not The Best (Home Demo). It sounds like an idea for a song with Geldof playing acoustic guitar and sounding like Bob Dylan. A nice curiosity, and more like something from Geldof’s recent past than a Rats song. Perhaps the seed of the solo career!

Just to complete the story, alternative versions of Drag Me Down and Lucky exist. Fortunately, they aren’t here. This is good news as they sound like Huey Lewis & the News! The production was changed for the US, but the originals which appear on this re-release are far superior.
at 9:00 am